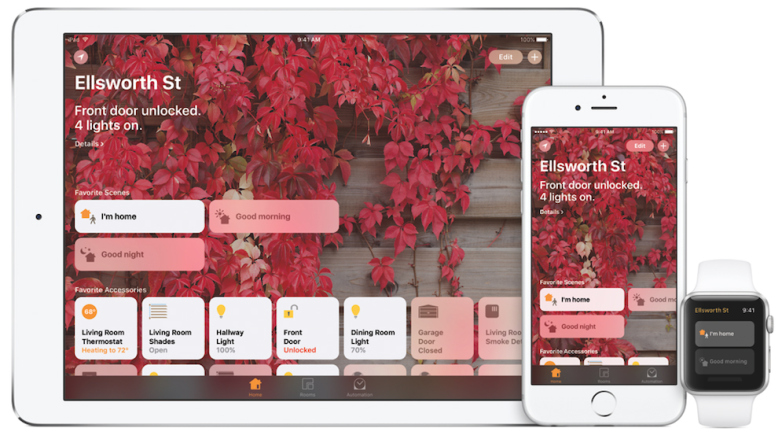 Smart home is not something new or very futuristic. But until now smart home systems seemed to be very complicated, needed to have skills to install smart home controls and was not cheap. In general, when choosing smart home system, you had to choose one brand or manufacturer. And one manufacturer could to offer limited number of smart devices, for example only smart heating system.

However, as the software progresses, the smart home systems become more and more simpler. Smart devices begun to use wireless networks for communication, which further facilitates the installation of such systems, because adding a smart device to the home no longer requires tearing down the walls to run the wires for device management.

Remotely controlled devices are now more widespread. And now is hard to surprise someone that you, for example, have the possibility of switching on or off heating control or home security system over a distance. Many new devices have it. However, when installing separate and interconnected non-communicating devices, the wall on which the control panels are installed may look something like this: It’s not clear which keyboards controls which device. Worse still, if the management of different system is in different place at home. Even if each device can be controlled by the application on the smartphone, it is complicated to use different application for every device at home.

A truly smart home has to make life easier, have to know how to make decisions and you could manage everything easily, conveniently and from one place. It does not matter if it’s just one device hung on the wall, computer, a smartphone, or even a smartwatch. Smart home devices need to be able to speak the same language, only then can be easily automated for example. After leaving the house: the doors are locked, the alarm system is activated, the window blinds are lowered, the heating, ventilation or air conditioning system switches to energy saving mode, lights, music will be switched off. Until there is no one at home, robotic vacuum vacuums the floor. And when you return, the home will meet you with the required temperature or humidity, ready coffee, turned on lights and your favorite music in background. And all this would have done without touching one finger! Yes, it’s possible nowadays.

Modern smart home devices usually speak one of these languages:

ZigBee –  is a wireless mesh network where devices can act not only as a network user, but also as a transmitter, thus extending network boundaries and enhancing the signal. Such devices do not require any extra reliable and high-speed wireless network. ZigBee can be used in door locks, bulbs, switches, electrical rosettes, thermostats and similar devices. ZigBee is used by Philips Hue, WeMo.

Z-wave – a very similar protocol to ZigBee. Roughly speaking, Z-Wave differs from ZigBee only at network speed. Z-wave is about 6 times slower than ZigBee. But its advantage is, because of the slower Z-wave network, devices consumes less energy, which is very important for battery powered devices. Z-wave is used by the SmartThings.

Apple HomeKit – is one of the newest smart home protocols. HomeKit has the advantage that it is based on software, and for communications between devices it is using Bluetooth, WiFi or LAN. The cons, but at the same time and the pros, is the fact that if the manufacturer want to use HomeKit, it must pass a strict Apple security check and rewuirements. That how Apple helps protect your home network from various security breaches.

An Apple HomeKit enabled device can also use any other protocol. For example, the Philips Hue bulbs uses ZigBee for communication with Philips hub and each other, but at the same time supports HomeKit.

For my smart home, I have chosen Apple HomeKit, because this protocol turned out to be the most flexible, and the number device supporting HomeKit is growing rapidly. Apple’s strict control for devices adds security. And big plus for HomeKit – Apple voice assistant Siri can control devices. So it is easy to control smart home by voice.